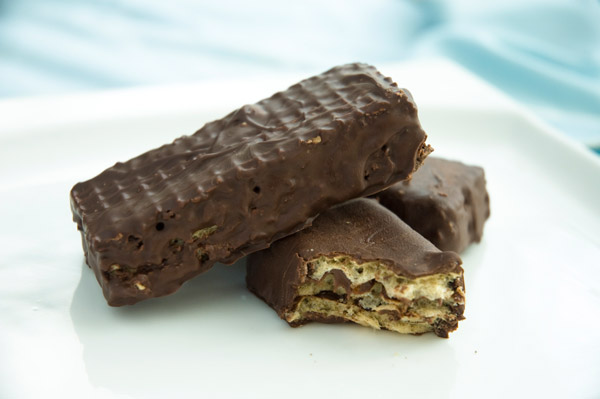 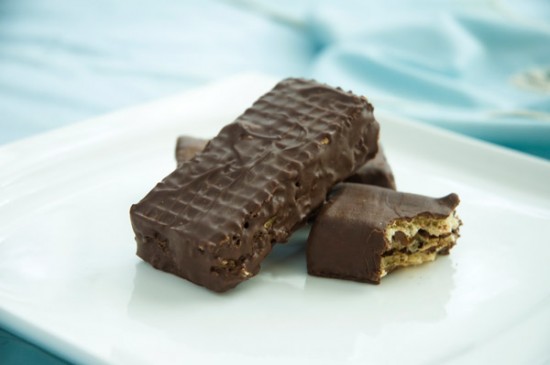 I like wafers. I like Kit-Kats and Keebler Fudge Sticks and even the little boring generic ones that just have one layer of vanilla cream in between. I like wafers that are covered in chocolate, like the Mocha Cappuccino wafers above, just as I like wafers au naturale, like the Lemon Cream Cheese wafers below. I pretty much like wafers in every situation and configuration. Sam I Am would love me. 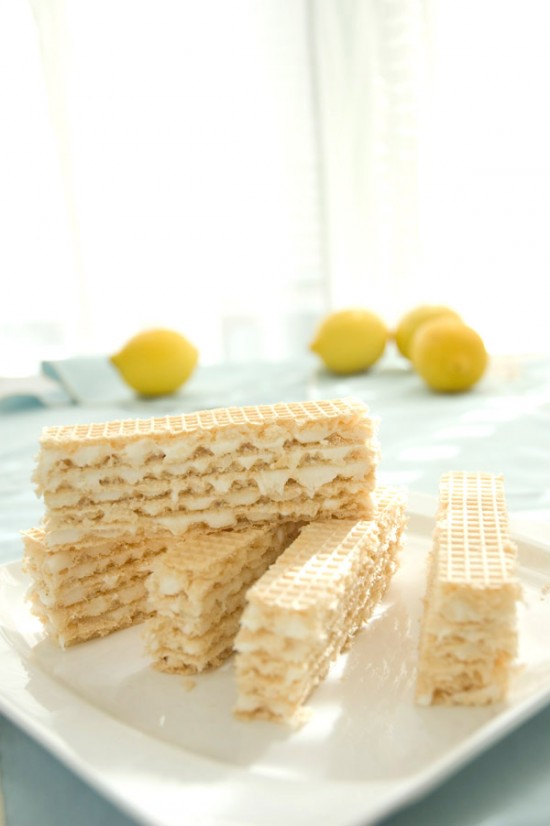 Oh, also, I made all those wafers. They were pretty much the easiest thing ever, because all I had to do was take some stuff and spread it on some other stuff. We’re talking about sandwich-level kitchen skills, you guys. PB&J.

It all started when I finally decided to check out the tiny international market by my apartment. Alongside the vast selection of halva, I found a roughly letter-size package of “wafer sheets.” (They also came in tabloid, to my delight, but I wasn’t sure I was ready.) Then at the regular grocery store, while gazing slack-jawed at the wall of peanut butter, I noticed that Jif has started making two kinds of hazelnut spread. One is chocolate. The other is “mocha cappuccino.” I was pretty sure this was my destiny. 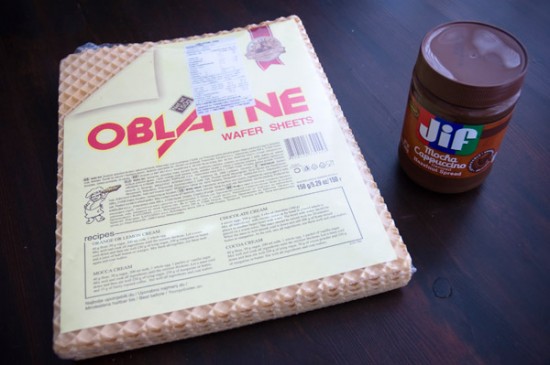 You know what I bet you guys are sick of reading on food and craft blogs? I had this idea, and I didn’t know if it would work because it was really out there, but oh man, I applied my endless talent and guess what? Turns out I’m a genius! Be like me!

Yeah. I don’t want you to think that’s what I’m saying. I am not. 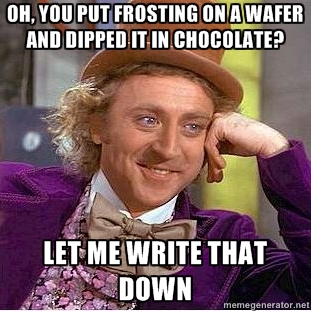 But here are the five and a half things I learned that might help you.

1. An entire jar of Jif doesn’t go as far as you would think. I got two letter-size layers out of it, which means I was only able to use three of my wafer sheets. Although that turned out to be the ideal cookie thickness, I had expected it to go much farther. 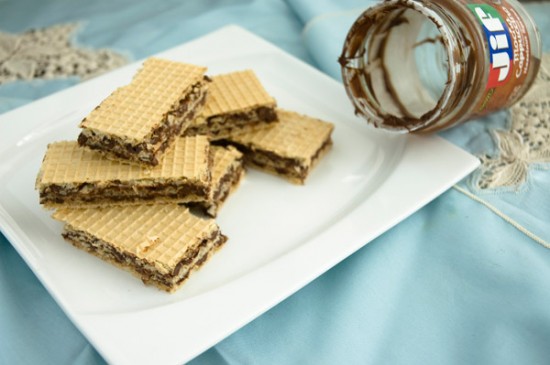 2. Pretty much anything you put on there is delicious. I used up my remaining wafer sheets by spreading them with some leftover lemon cream cheese frosting I had in the fridge. Those are just as amazing as the chocolate ones, but the moister filling results in a sort of Napoleon-style treat after a day in the refrigerator. You can get lovely results from any of a variety of creamy spreads, from frostings to fillings to nut butters. (I feel like you’re waiting for me to stop talking right now so you can go get the Nutella.)

2.5. Regarding the lemon wafers, you may have noticed that they’re taller, even though I mentioned making them out of just what was leftover from the chocolate ones. I broke my last two wafer sheets into three pieces before assembling them, so that I could have six wafer layers. They’re a little gigantic, but tasty in their own right. Next time, I might back it down to, say, four wafer layers. 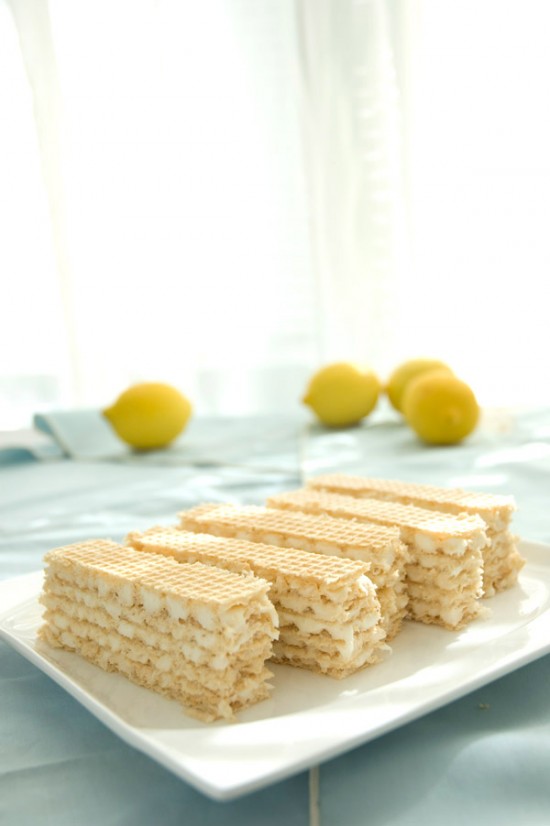 3. Wafers have one side with a shallow square motif and one side with a deep diamond motif. Use firm but gentle pressure to fill in the diamond side of the wafers. A rubber spatula was too flimsy for me, so I used a pie server because it was large, hard and flat. Use what works for you. Also, I placed all my layers diamond-side-up except the last one, which I reversed so that the square side is always facing out. Looking at the finished wafers from the side, I think it would be a good idea to switch the orientation halfway through instead of waiting until the last layer, so that the layer with the most filling is in the center.

4. It’s tough to cut the wafers without the edges getting smashed and ragged. The trick seems to be to use a huge knife, line up your cut, and press down as swiftly as you can, all in one go. (If you know a better trick, please share it in the comments!)

5. You don’t have to cover these in chocolate and you don’t have to refrigerate them. But doing either, and ultimately both, makes them crispier. Naked at room temperature, they lacked optimal crunch and tasted almost stale, but once they were coated and chilled, they were perfect. 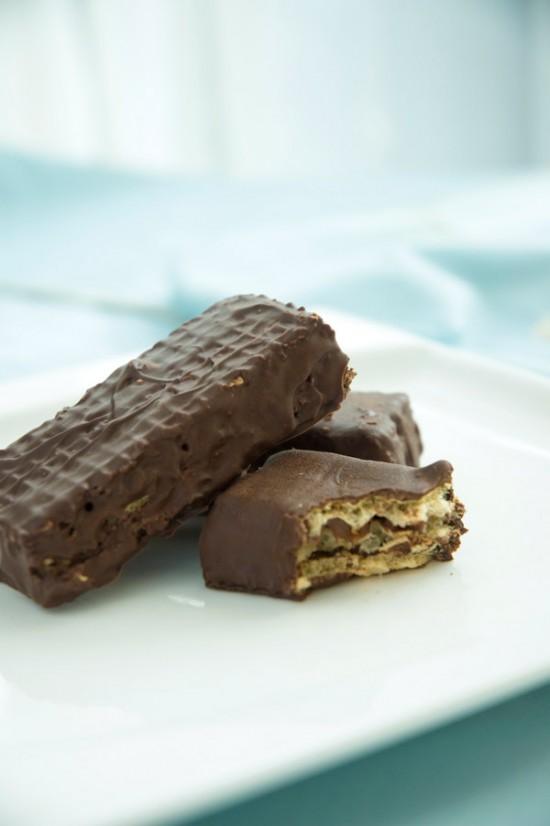 I have no idea what kind of wafers to make next. Maybe something with an amazing homemade cream filling. Any suggestions?