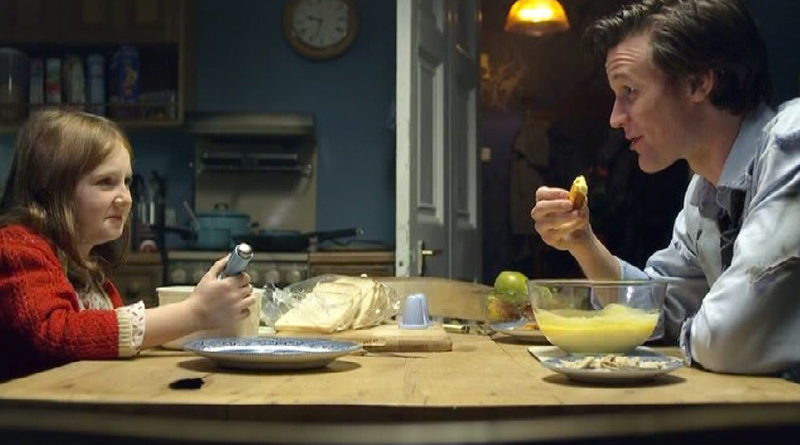 On Tuesday, I came this close to buying a $13 flashlight.

Let me assure you, we have flashlights. We have at least one in every room, should a power outage ever take us by surprise. That’s in large part thanks to John, who once had a birthday party themed on flashlights, where someone ralphed all over me ten minutes before the party even started but we all had a good time nonetheless.

There’s been an abundance of flashlights in our lives ever since. Yet here I was, seconds from pulling out my credit card and ordering a flashlight for USD$13 plus shipping and handling. And I know what you’re going to say. “But Kristina, you don’t even like Doctor Who!”

Was that not what you were going to say?

Back it up. I forgot to tell you it was a Tenth Doctor sonic screwdriver replica with an extra-bright blue LED flashlight built in, and although I did entertain the notion of ordering the Eleventh Doctor version instead which doesn’t have a proper flashlight, I ultimately decided I’d rather have an excuse to carry it around than have a useless TV souvenir. I don’t really believe in collectibles. Or cosplay.

Aha! Now you’re ready to say it, aren’t you? And you’re right! You must know me pretty well to remember all the times I’ve been disappointed by Doctor Who, to the point of abject scorn. Did we go to the same high school? I thought you looked familiar! So you were probably there at the height of my immersion into the Hitch-Hiker’s Guide to the Galaxy and Red Dwarf, back when teachers and strangers used to make the leap to Doctor Who in conversation, right?

“No,” I would reply. “I’ve never seen it. Is it good?” And they would assure me that it was right up my alley.

It was a long time before I finally saw it, and let me just tell you, at the risk of offending the legions of fans of what I now know is Tom Baker’s beloved Doctor, that this was probably the biggest gap I’d ever experienced between expectation and reality. All of a sudden, I was belatedly offended by every single person who had ever recommended this to me. The plot was opaque and nonsensical, the characters’ motivation was a complete mystery, and the whole thing relied on the heavy use of some of the worst special effects I’d ever seen. What was it about me that made people think I would like this? This was not up my alley! Couldn’t be further from my alley! I had never seen a single weird space-octopus in my alley, not even once!

For years thereafter, whenever anyone said, “Ah, Red Dwarf! Do you like Doctor Who?” I told them firmly that I absolutely did not, and then probably went on to alienate them in a number of other ways I wasn’t even aware of, because that’s how good I am with people.

Then no one asked for a long while, until some months ago, when my friend Jason brought it up. I told him no, I absolutely had not watched the new Doctor Who, and no, I absolutely didn’t intend to accept his recommendation because, as I had told him, I do not like Doctor Who so please don’t mention it again. And then I questioned his taste in a judgmental manner.

But it kept coming up, and he would say, “Have you seen it yet?” and I would say no, Jason, of course I haven’t. He told me that he, too, had previously had feelings of disdain for Doctor Who, but that this new season was different.

“He goes around with this girl,” he said. “She’s cute,” he said. “You should give it another try. I think you’d like it,” he said.

And then for some reason I did. I watched from the beginning, including an accidental viewing of a making-of wherein Steven Moffat, the man responsible for Coupling (this, not that), explains how this Doctor is different, and how he sees the show. That’s all it really took. The next time Jason brought it up, I had seen every episode that had yet aired in the U.K. and was apparently two hours ahead of him.

So that’s that, I guess. Half a lifetime of distaste, erased by one little bow tie. Although I’m still not ready to revisit that Tom Baker episode I saw. Space-octopus, no thanks.

But since Series 5 ended I’ve sporadically sampled episodes of the first four modern seasons, with mixed results. That one with the motorway was pretty good, especially for a New New York episode. I don’t mind telling you I’m not crazy about Eccleston on the whole, but Tennant’s all right, particularly after Rose. Still, where Doctors are concerned, I suspect my heart may forever belong to Matt Smith, square head and all, for being so curiously kind and affectionate and spontaneously, justifiably formidable.

So that’s how I came to be interested in the Tenth Doctor sonic screwdriver replica with the extra-bright blue LED flashlight built in.

(Wow, I felt a little like Ralphie Parker just then. Did you feel it too?)

Anyway, look. I’m not interested in entertainment memorabilia with the name of the license on it, or dust-collecting commemorative figurines, but the flashlight fit the one category I’ve got a weakness for: life-sized replicas that replace some ordinary item I use in my everyday life. It may be just as dorky, but it’s easier to act casual about a “Don’t Panic” decal on your iPhone than a Spock standee in your bedroom, and I just don’t possess the geek wherewithall to stand by my weird obsessions when confronted.

That’s why I was delighted to see a sonic screwdriver with a purpose. I could keep it with me all the time and secretly pretend it was real, but as far as everyone else would know, it would just be a useful thing to help me unlock my car at night! What genius had developed this surefire TV tie-in bestseller? It was about time! I had to have it!

The only thing that stopped me from ordering immediately was the dropdown box with only one option: “Tenth Doctor.” There couldn’t be others, could there? On a radical whim, I typed “Eleventh Doctor” in the search box and up came the green-and-brass version, made to scale, complete with sound effects and springloaded extending action. Can you believe it! Someone had made a second sonic screwdriver!

But it wasn’t a flashlight. So just to make sure I wasn’t missing an even better third option, I googled “Eleventh Doctor sonic screwdriver flashlight” and wound up at Amazon. I noticed there were actually quite a lot of sonic screwdrivers listed under “related items.” And that’s when it finally hit me.

They hadn’t started making Doctor Who toys in honor of my long-delayed acceptance. Tardis-shaped piggy banks had been around for decades before I was born, and decades more before I was ever interested. I had forgotten that I was late to the party, and that before I got here, the party had seemed exceptionally lame. Suddenly, a $13 flashlight was just about the dorkiest thing I could think of.

Oh, I’m probably still going to get one. I’m just going to take my time picking it out.

In the meantime, this little mix-and-match recipe roundup goes out to my favorite Doctor. Choose your fish stick, choose your custard, and make a night of it. Gross? Yeah, probably, but look how gorgeous they are!

(Oh… and don’t think there isn’t actual fish custard out there, because there is. Pleasant dreams, everyone.)