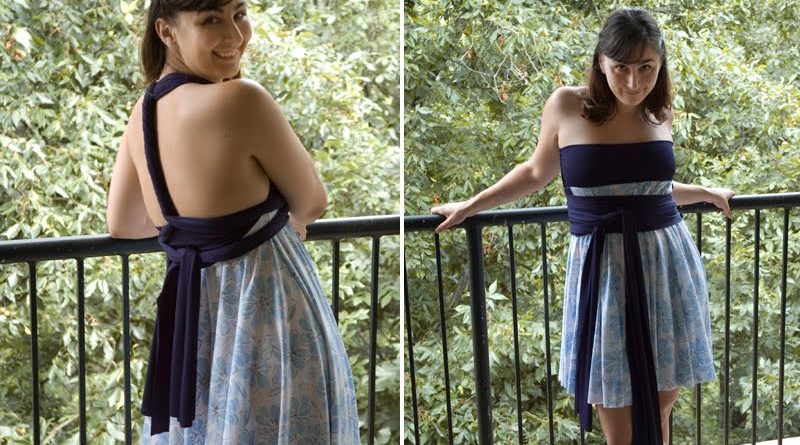 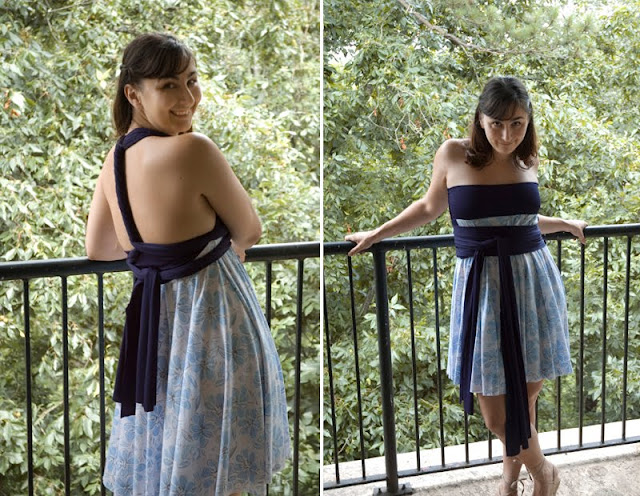 I made this thing. It’s pretty cool. It’s a convertible dress that’s basically a circle and two straps, so it’s really easy, inexpensive, and crazy versatile. It’s been around forever and everyone seems to love it (in fact, part of the reason I’m posting this is to answer some questions for people I’ve run into), and I can hardly believe how close I came to not making it at all. 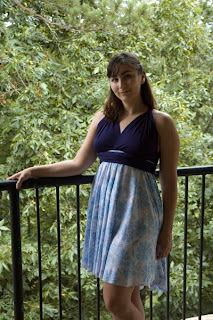 I first found the instructions at a blog called rostitchery, and then I came across a second set at Cut Out + Keep. It sounded so easy. Cut out a circle with a hole in it, sew on two straps, and voila, a dress you can wear a hundred different ways. Sign me up! I have a sewing machine! Sure I can sew a straight line! Let’s get this done!

So I bought some material, spread it out in the living room, cut out my pieces, and…

I didn’t understand the next step.

Turn the skirt inside out? But it’s just a circle. I can turn it… upside-down I guess. That doesn’t seem right. Why would I want to sew the straps straps to the back of the skirt instead of with the right sides facing? If I do sew them to the back, should I pin them flush with the waistband, or should they overlap the waistband and hang the other way?

And what’s this about making them overlap each other? By how much? Why? 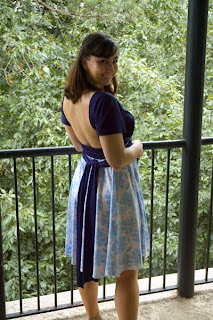 There’s, like, a band of fabric involved? It goes around your waist somehow? And its only purpose is to create a finished edge around the back of the dress? So it’s supposed to go behind the straps instead of below them? And you’re supposed to pin it and sew it all together at once? Even the overlapping straps? With one seam?

I figured I was just being thick. Other people had figured this dress out from the very same instructions. So I googled every blog and article I could find and looked at every available photo of the dress, but there wasn’t much in the way of diagrams or clear photos of the process. I read about 15 pages into the 140-page forum thread on Craftster. I saw people who seemed confused like me. Unfortunately, the craftsters clever enough to figure it out were posting photo after photo of their successes, and didn’t go into much detail. The photos showed the dresses in action with the straps wrapped all around the area I needed to get a look at. There just wasn’t much to grab on to, for someone as dumb at sewing instructions as I am.

So I folded up my circle and my straps and I put it all back in the bag it came in. Cheerfully, I declared, “This isn’t fun anymore,” though I felt heavy with disappointment. “I quit.”

And I went upstairs to watch TV.

A couple of hours later, some of the concepts had settled in a bit, and I thought I might finally be able to make some sense of things if I stopped worrying about the words and tried to put the dress together the way it seemed like it should go. I decided to go back and give it a shot.

I was wearing my new dress after about half an hour. I’ll be honest… I still don’t understand the part about turning the skirt inside out, but I do know that even without understanding everything, I was finally able to conquer the project and ended up with something lovely. There was a whole lot of research involved on the way, though. And a lot of frustration because I hadn’t really ever sewn anything without a pattern. So here are the things I wished someone could’ve told me before I started (and a few answers that I was able to find, but didn’t realize the importance of until later). Start by reading the original instructions at rostitchery and/or Cut Out + Keep, and then use the information below to hopefully help clarify anything that might’ve gone over your head.

Mind you, in spite of all my whining, the original directions from rostitchery and Cut Out + Keep are extremely helpful, and I would never have known where to begin if it hadn’t been for both of those posts. I’m pretty sure it’s my impatience and lack of experience that made the project so tough for me to figure out. However, if my diagram and the links I’ve collected below can save at least one person from the frustration I experienced, then it’s all been worth it. It really is a simple project that anyone can make. 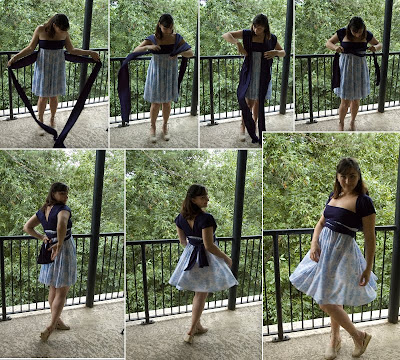 And once you’ve finished yours, bully for you! Check out all the ways you can wrap it. And these are just the basic ones! It’s fun to stand in front of the mirror and make up new styles. You can twist the straps or not twist them, wear them in the front or turn the whole dress around backwards, and choose between keeping the waistband at your waist, hiking it up above your bust to make a minidress, or pulling it down just above your hips to wear as a skirt. Cross the straps? Knot them? So. Many. Options! 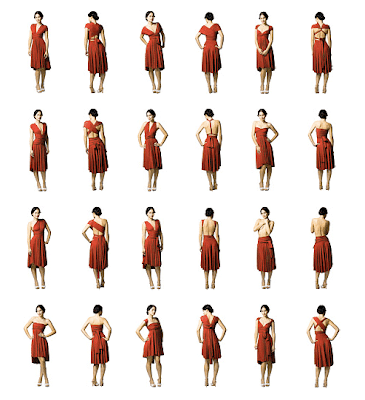 The design itself has dubious beginnings. Some call it a classic, other cite a designer. This blog talks about that a bit, and one designer who’s been credited with first designing the dress (for “Butter by Nadia,” as pictured, left) chimes in to explain her role in the story. The fact is, lovely and simple as this dress is, a lot of people have probably designed it independently from one another. It brilliantly sort of strips the idea of a dress down to its most basic concepts. Surely by now it belongs in the crafty version of the public domain, at least for sewing-types (and the rest of us) to make their own.

Since you’re not using an actual pattern, I guess it’s even okay to sell your own version of this dress, and many people certainly do. I’ve posted a couple of links below as examples. As for me, I’ll continue making them for myself and friends until everyone I know is sick of it and doesn’t ever want to see a dress again as long as they live.

Collected links:
These instructions (diagram and all) en Francais, courtesy of Appolinaryia, May 2015
Rostitchery blog instructions
Cut Out + Keep project page
Craftster thread
Origin story
$895 somewhat-comparable version of this dress from Donna Karan
List of infinity dresses for sale on Etsy, from $30–$200

182 thoughts on “The Convertible “Infinity” Dress: How it almost defeated me, and what you need to make one”