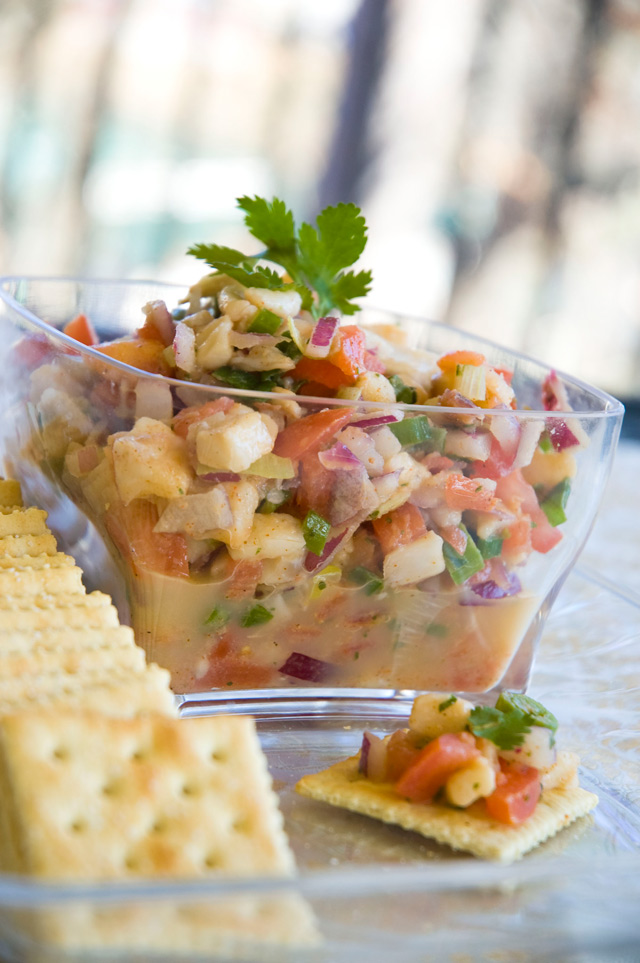 Back in October, I was invited to try out a new restaurant called Tin Can Fish House in Sandy Springs. From the name, I wasn’t expecting a lot—I half expected to find Heathcliff and his pal Riff Raff shaking down patrons by the dumpster—but to my surprise, I loved it. The paella was warming and generous, the bang-bang shrimp were tangy and crisp, and the key lime pie was tart and silky and not too green. All the way down to the beer list, Tin Can was a lot better than it had to be, I thought, especially for a family joint in the suburbs.

I was especially impressed by the ceviche, which was served as an appetizer in a little crock with saltines. I had never had particularly good ceviche before. I might blame my distaste partially on the squick factor of fish cooked without heat because it seems like maybe it isn’t really cooked, which, I know, is not only scientifically inaccurate but also stupid coming from someone who inhales sushi by the boatful, but I was a baby about it. And I hadn’t tasted a ceviche that could change my mind. But at Tin Can, the ceviche was light and fresh-tasting, with a perfect spicy kick and no trace of a raw-fish texture.

I didn’t have the foggiest idea how it was made. I did know, however, that I wanted more of it. So I asked for the recipe.

Crazy twist: I got it.

Mix all together with a splash of fresh lime juice and olive oil; season with salt and pepper, and a very small pinch of cayenne pepper to add a bit of heat.

Refrigerate for two – three hours, as the lime juice serves to “cook” the tuna, then serve.

I was delighted and grateful to the chef for sharing this with me, but I was also somewhat puzzled. Where were the measurements? I googled several popular ceviche recipes, noting how vastly different the ratios were in each. That was enough to comfort me; the measurements must simply be a matter of taste. After another round of googling, I was also convinced that the sun would still come up in the morning if I substituted much cheaper tilapia in place of ahi tuna. So I did. Because tuna. You guys. It’s at least twice as expensive. It’s not for experimenting.

After all was said and done, though, I liked the unfishiness of the tilapia, and I know I’ll be making it this way many times in the future.

The first step is to dice the fish, which is a lot easier to do if it’s still partially frozen, so it doesn’t mush all around while you’re trying to slice it. But like Rumpelstiltskin, the fish gods aren’t known for their altruism, and in exchange for the convenience of stiff fish they will take all the feeling out of your fingers. Yes, they will freeze those suckers solid. But it’s worth it.

The second step is the onion. This is where I put down paper towels, flipped my cutting board over to the clean side, and turned on the hot tap to wash my knife, as we all do when switching from meat or fish to vegetables. But then I got to thinking. What could possibly be the harm in cutting this onion with a knife that touched raw fish if I was going to put the chopped onion right into the same bowl with raw fish anyway? All aglow with the joy of rule-breaking, I turned my cutting board back to the dirty side (just because I could) and started chopping my onion with my unwashed knife. I moved the first chopped half to the bowl to make room on the board to chop the rest. But when I saw it in there with the fish, I realized it was all the onion I needed.

Oh, I thought, looking down at the perfectly good half of a red onion I had just thoroughly contaminated with raw fish. So I guess that’s why it’s a good idea to keep stuff clean. 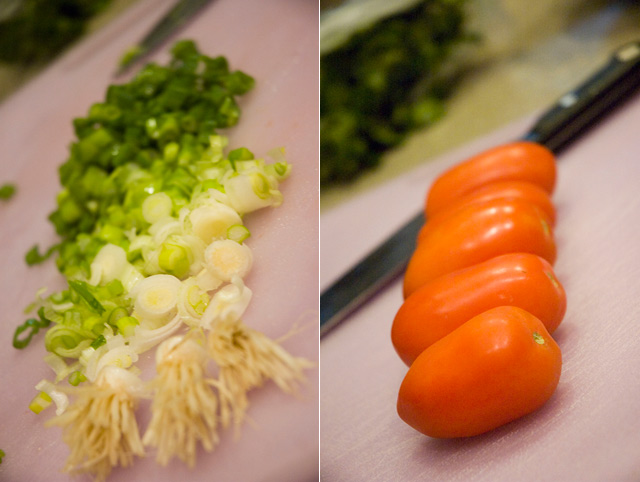 So clean off your stuff, and chop the onion, the scallion, the tomatoes, and the cilantro. I did my shopping for this dish at a strange grocery store, which seems to just never be a good idea. No matter how nice a neighborhood you go to, their grocery store isn’t as good as your own home grocery store. It always takes longer and the produce always seems less fresh. I mean, just look at this pitiful cilantro: 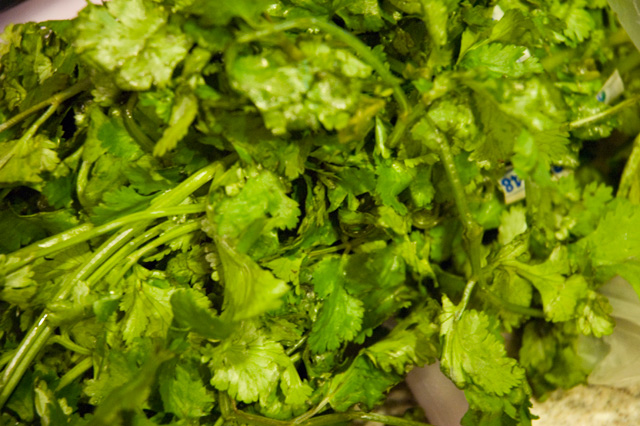 Yuck, right? But it was the best they had and I was in a hurry, so I bought it and selected the salvageable parts. It was worth it, because fresh cilantro makes all the difference. Most countries and even some U.S. states have their own distinct versions of ceviche, and many don’t include cilantro at all—some are even made with ketchup, seaweed, or coconut—but this recipe, the recipe that changed my mind about ceviche being possibly yucky, cries out for fresh cilantro.

Anyway, after that, it’s just a matter of juicing some limes, drizzling some olive oil, chilling a while, and seasoning. I went ahead and took notes as I experimented. Below, I’ve written out the measurements and ratios I used. The dish got great reviews from friends at a potluck, so I fully trust the recipe, but don’t be afraid to experiment because I’m fairly certain you can’t mess this up.

Ceviche a la Tin Can

Makes roughly 4 cups, enough to serve as a party appetizer