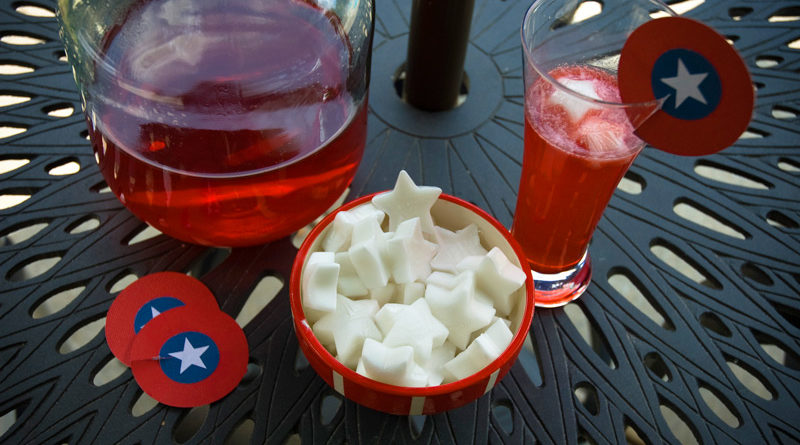 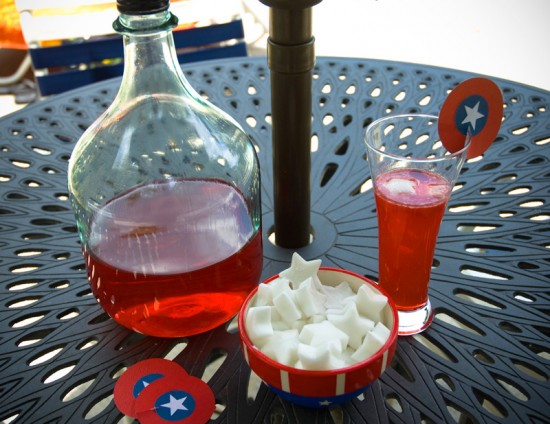 I don’t know what month it is where you are, but around here, the Fourth of July is fast approaching.

We like to spend our Independence Days outdoors when possible.

This year, we’re having punch. Very red, very American punch that tastes like ambrosia—cherry, marshmallow, and coconut—with sweet little white stars. It makes you happy. It makes you strong.

This is Super-Soldier Serum. 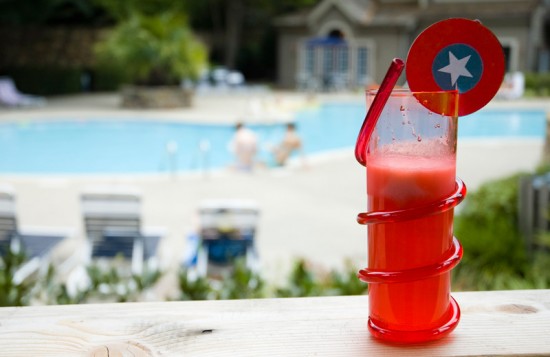 I mean, yeah, it’s just a simple punch with five ingredients, one and a half of which are water. Sure, there’s Kool-Aid powder in it. And yes, it is dressed up as Captain America with little paper shields. I’ve come to see all these things as positives. So will you.

Ambrosia might not seem all-American at first glance, being the food of the Greek gods—foolish gods who didn’t even know about the Slap Chop or tanning beds or bacon double cheeseburgers. But it’s my suspicion that the Greek gods did not lounge around Olympus gnashing on wet fruit salad with marshmallows. As a matter of fact, I’m pretty sure the ambrosia they ate was nothing more than the intangible idea of a godly food, in the same way that the gods themselves were an intangible idea of a cocky bunch of mountain-loungers.

The real-life wet fruit salad we call ambrosia, on the other hand, is credited to the good old Southern US of A. And while Steve Rogers may have originated several states north of the KFC-and-camo-pants district, Captain America represents all of us. North, South, East and West. Even when we’re drunk. 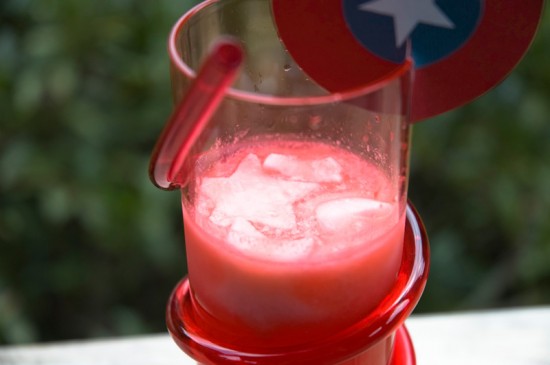 Make an extra pitcher of ordinary Kool-Aid for the kids, so you can sip your vastly-more-delicious Serum and feel sorry for them. It’s what Cap would do. (Disclaimer: He probably wouldn’t.)

The pièce de résistance is the little white coconut stars. They’re non-alcoholic, so kids can enjoy them, too. As they melt, instead of watering your Serum down, they infuse it with more and more delicious coconut flavor. They’re absurdly easy to make and wholly adorable. 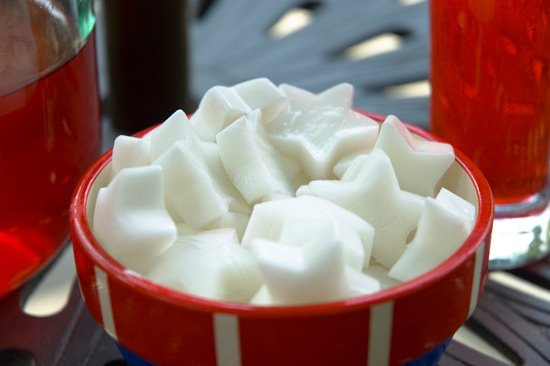 I’m including this merely to confirm your suspicion: that there’s no recipe for coconut ice. To make coconut ice stars, simply pour canned coconut milk into star-shaped ice trays and freeze. (Shake the coconut milk first because it tends to separate.) I found my ice trays for $1 apiece at the front bargain section of Target, because I am lucky and when I go into a store just to check if they have something, the power of my whim summons that item into a 20′ radius from the front door. If you have trouble finding them locally, you can order them (albeit at a slightly less killer bargain) from Amazon here.

If you prefer sweetened coconut milk (which tastes better on its own and in less sweet drinks; Super-Soldier Serum is plenty sweet for unsweetened stars, though), you can heat the coconut milk and stir in some sugar or honey, or mix artificial sweetener into it without heating. If you do heat your coconut milk, be sure to let it cool before freezing so you don’t melt your ice trays.

Mix everything up in a pitcher and serve chilled with coconut ice. DONE.

This shield garnish is cut from three layers of colored paper. You can download a printable template for the three simple shapes and cut them out by hand from colored paper. (If you’re fortunate enough to have a Silhouette cutting machine that can do it for you, you can download a template for Silhouette Studio.) Just cut out the shapes, glue the layers together, and perch your shield atop your glass for a festively geeky inedible garnish. Then head for the sunshine and work on your perfectly patriotic buzz.