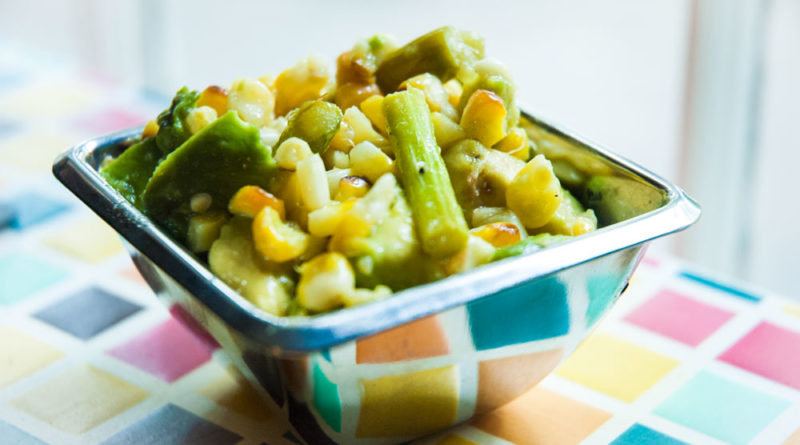 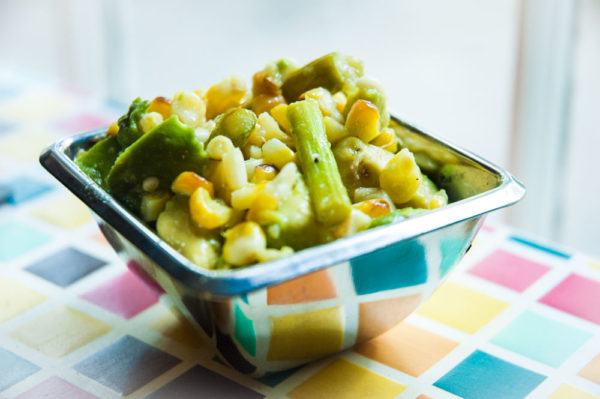 In the summer, vegetables should be fresh, dinners should be quick, and cooking should be done almost exclusively outdoors. But because I’m lazy and I hate to be hot, I often try to cheat and use the broiler so I won’t have to go outside. This is a mistake. Instead of me being hot for 20 minutes, everyone is hot for the rest of the night, because I have lit a fire in our kitchen. To try and keep cool.

I don’t know why I do this.

When I use the grill instead to make a light veggie dish on a cruel summer day, everybody in the house is at least 40% less pissed off come mealtime. If I were to try to pinpoint a single overarching goal in my life during this baffling full-time domestic period, that might be it.

Most of the time, I make one vegetable per meal. Sometimes, I make two separate vegetable sides. But since we’re always working to increase our vegetable consumption, I love finding ways to combine multiple veggies into something more interesting, and these three go together really nicely (yes, avocado is a fruit, but on the other hand, shut up). Plus they’re good at every temperature, which means they can be enjoyed hot for dinner (or lukewarm if the ribs take longer than expected, uh, just as a totally random example), and the leftovers can be eaten cold with the next day’s lunch instead of the same old greasy potato chips (uh, or whatever).

Also, our pet toddler has days when he eats everything and the paper it came in, followed by days when he only likes goldfish crackers. But he seems to enjoy this veggie salad consistently. I mean, it’s probably the honey. But I’ll take it.

We’ve juuust missed the asparagus peak, but that’s OK! It’s 2015 and we can have asparagus year-round. It’s waiting in the produce section, alongside the season’s sweet, sweet summer corn and plump avocados—although with avocados, “in season” is less of a concern than “ripe damn it.”

To that end, BuzzFeed Video has this helpful tip for you, which I will summarize below in case you don’t have sixty seconds to watch the mystery unfold:

The tip is to pop the little stem off and check the color inside. Green is underripe, yellow is just right, and brown is terrible mush. The first instance of this tip that I can find online comes to us by way of Erica at Northwest Edible Life in 2012, although she doesn’t mention how to proceed with an underripe avocado after you’ve removed the stem. Presumably, that little area will dry out, and will no longer be much of a ripeness oracle. Can you jam the stem back in and check again later? Anybody? Erica, are you out there?

In the meantime, back to the corn and the asparagus and the avocado. They’re nice together! Whip up a sweet vinaigrette (I use rice wine vinegar, olive oil and honey with a splash of balsamic) and enjoy it hot, warm or chilled.