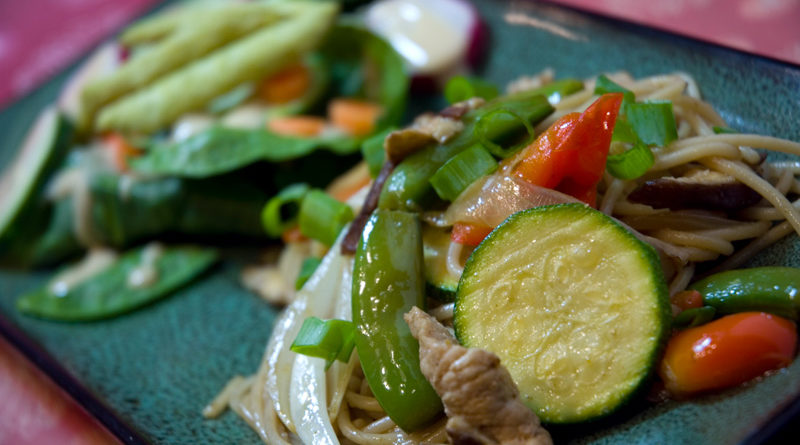 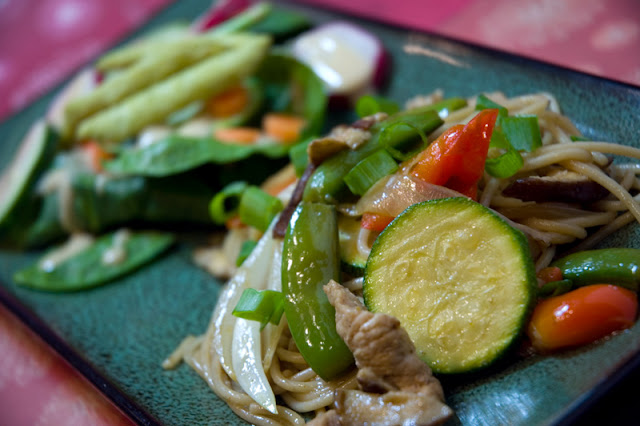 So don’t go into this little stir-fry recipe expecting authenticity, is all I’m saying.

However, if you go in with expectations of crunchy veggies and sweet, subtle curry noodles you’re going to be delighted. One arena in which my old Family Circle cookbook has never failed me (okay, except this one time when I tried a recipe for some kind of red cabbage with apples, beets and raisins all boiled in vinegar but that was certainly an exception and I have to take part of the blame for being stupid enough to try it because it said ‘cabbage’ and ‘raisins’ and ‘vinegar’ right there in the ingredients) is colorful, healthful, veg-ful dinners that are almost too simple to make. This one, like so many FC recipes, is tasty and refreshing and takes only a few minutes to throw together. It even comes in at under 400 calories per serving… if you can stop at one serving.

I added some additional veggies and hot pepper for a little somethin’, and I used lo mein instead of egg noodles, but the rest of the recipe came straight out of Family Circle.

Oh! You know what you should have with it? A light salad, with this perfect ginger dressing that I found a couple of years ago at the Frantic Home Cook. (I can’t seem to find the dressing recipe on her site anymore, but good news! At some point, I wrote the ingredients on a post-it which I stuck to the Singapore Noodles cookbook page. See below.) The salad makes a wonderful cold complement to the noodles, and it couldn’t be easier to throw together.

I mean, I guess it could, like if it was just lettuce out of a bag or something… with the dressing from the packet that comes inside the bag… so you just tear it open and make your whole salad with one hand while you watch TV… and then maybe you go ahead and just eat it out of the bag so you won’t have any dishes to do… but that doesn’t sound like you. Nah. You’re gonna make the ginger dressing. I can tell. And I support you.

Singapore Noodles with Pork and Vegetables