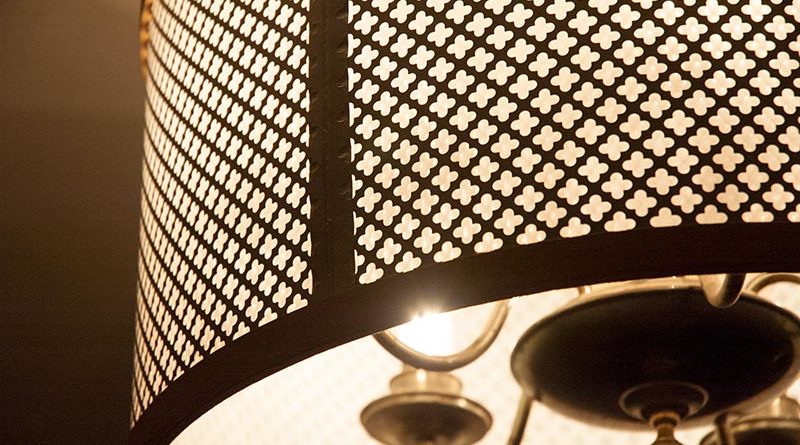 We live in an old house with old walls and old wiring and we love it. (Don’t worry—we’ve got lots of alarms and detectors connected to emergency services, and we mostly stay away from the asbestos in the basement, so there’s a decent chance we’ll survive.) We’re still figuring each room out, and although we haven’t gotten to the dining room yet, we did do one thing. We made a massive drum shade for the chandelier. 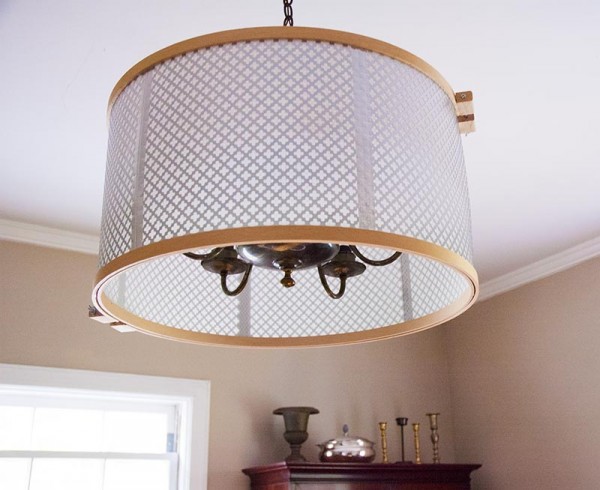 It took about an hour, and we spent just under $60. Also, it’s perfect and I am in love with it. It’s so shiny! And see the little wooden blocks on each side? Do you find them quirky and adorable? I sure do. Sometimes I turn the light on at night just so the neighbors can admire it from the street, like a major award. 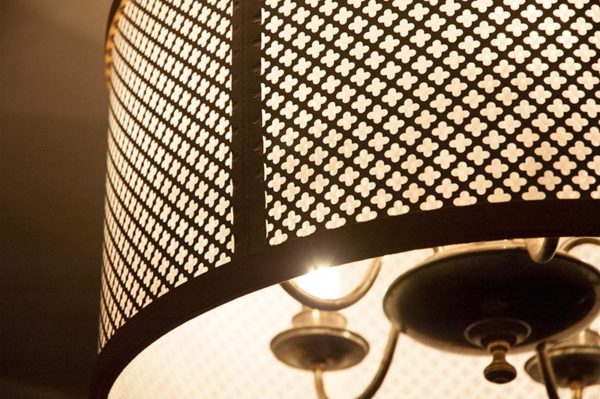 Here’s the thing: the chandelier we covered up is cool! It’s a regular old brass fixture that probably came with the house and it’s tarnished, but elegantly. Maybe not elegantly. Quaintly. These are the only photos I could find of it pre-project: both from the backgrounds of other photos, before and after we had taken off the frosted glass shades. Unfortunately, I never intentionally photographed the chandelier beforehand, so it kind of looks like I hired a private investigator to follow it around.

I admit I wasn’t completely wild about those glass shades, but I was happy to leave them alone…except one was broken. You can’t tell from the photos, so you must take my word for it. They had to go, and that didn’t leave much. 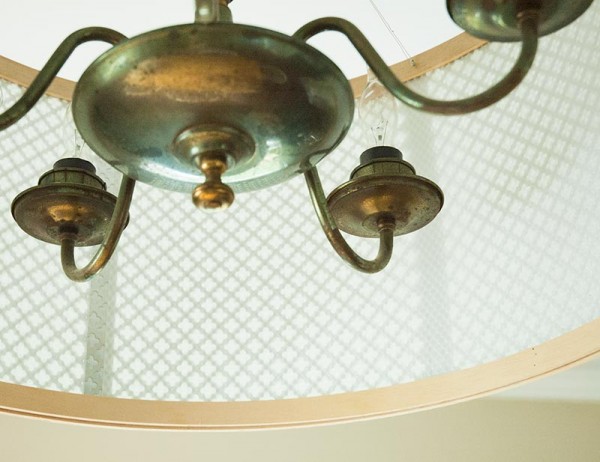 Without shades to shield its bare bulbs, the little fixture seemed sort of lonesome, not to mentionblinding. I shopped for a set of those mini lampshades that go over each bulb but as it turns out, I hate those. It also turns out I quite like this:[divider]

Since I’m not ready to show you the rest of the dining room yet (I told you, we haven’t gotten to it) please imagine that our house now looks exactly like one of these photos. Any one you please. Reader’s choice.

So based on these images, I decided we should cover the chandelier with a drum shade, but I wasn’t about to drop $300 on one before we’d even bought curtains. Apart from the money, a purchased shade would force us to take the chandelier down for installation, and I don’t mean to make a big deal of our tricky mid-century wiring, but it was more than we were willing to mess around with. All a drum shade is is a big cylinder, I reasoned. Inherently DIYable!

I devised a plan about how I could make it out of, I don’t even remember, like an irrigation hose or something? It was a stupid plan. Probably one of my all-time worst, including that weird wobbly robotic chicken I made out of wood for art class, except this time I had enough sense not to see a stupid idea all the way through. Instead, the gent and I stockpiled these items: 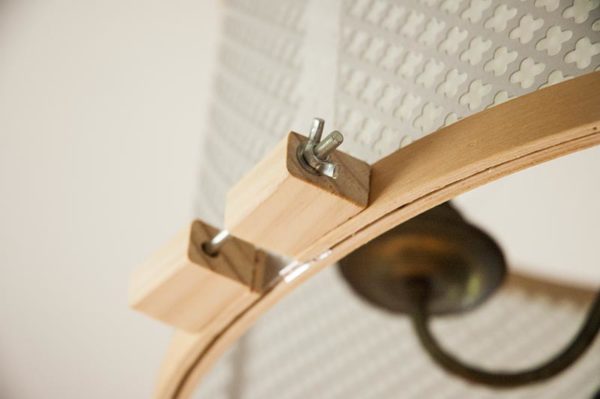 There are two reasons I don’t have a phototutorial to go with this. First, there really aren’t many steps to show—all the action kinda happens in one shot, around Step 6. Second, I needed all four of our hands at that moment, and for some reason we don’t employ a full-time photographer.

I did take one picture right after Step 8…but it doesn’t show you much except how badly we need to paint our shoe molding. 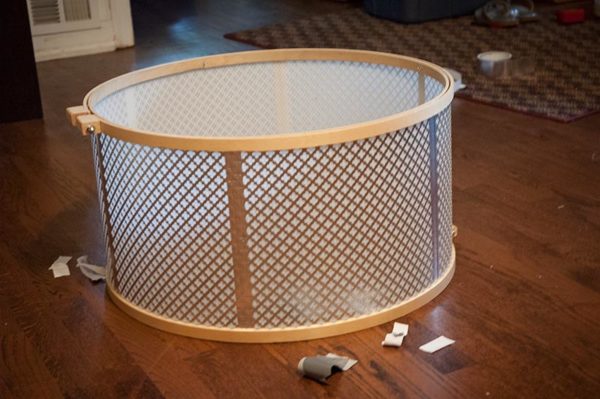 The thing is, this is about to look like a ton of steps, but they’re all really easy. I’m overexplaining. You’ll see what I mean—there are ten steps to this project, but the first five are literally just math and shopping. 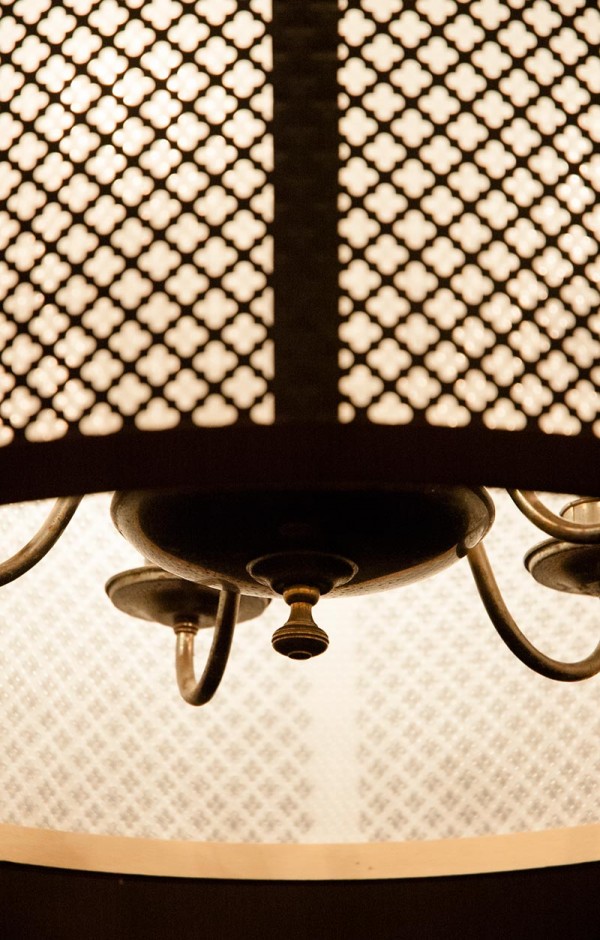 That’s it! It’s easier to do than it is to explain (or indeed to read). It felt like we had used some kind of house cheat code, because before we did it, we had this tiny rusted chandelier with bare bulbs, and afterwards we had glory and grandeur and the satisfaction of a job so surprisingly well done we sort of didn’t believe it. It was way too easy. 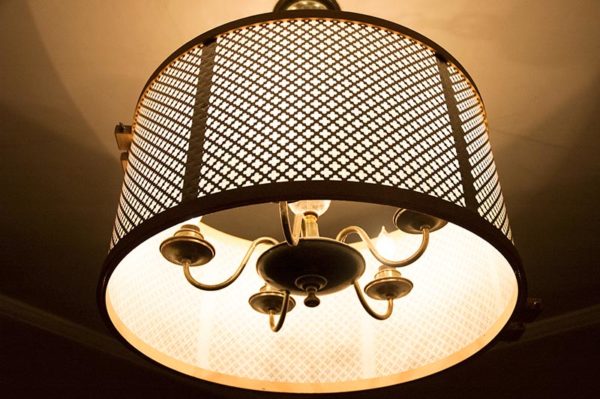 We hung it so that only the bottom of the little chandelier would peek out, but when you sit at the table, you can look up without the lights shining in your eyes.

Anyway, long story short, if you’re sick of your ceiling fixture but it’s not the time to replace it, make an outfit for it! We did, and would absolutely do it again, because we love it. And if we ever get sick of our cloverleaf metal (as if we ever could!) we will unfasten the wires, open up our hoops and swap out something else for an easy refresh. Someday. Maybe.