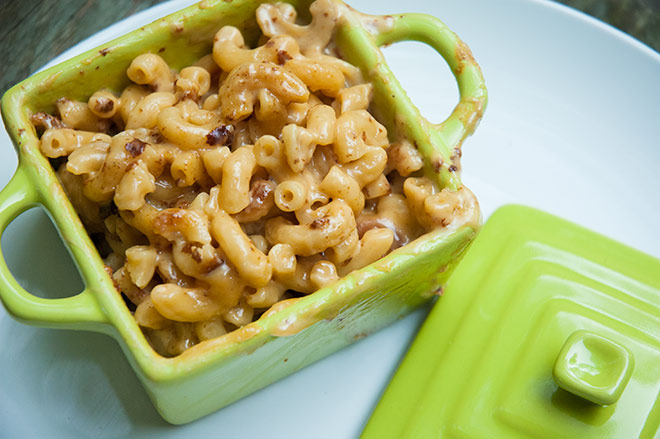 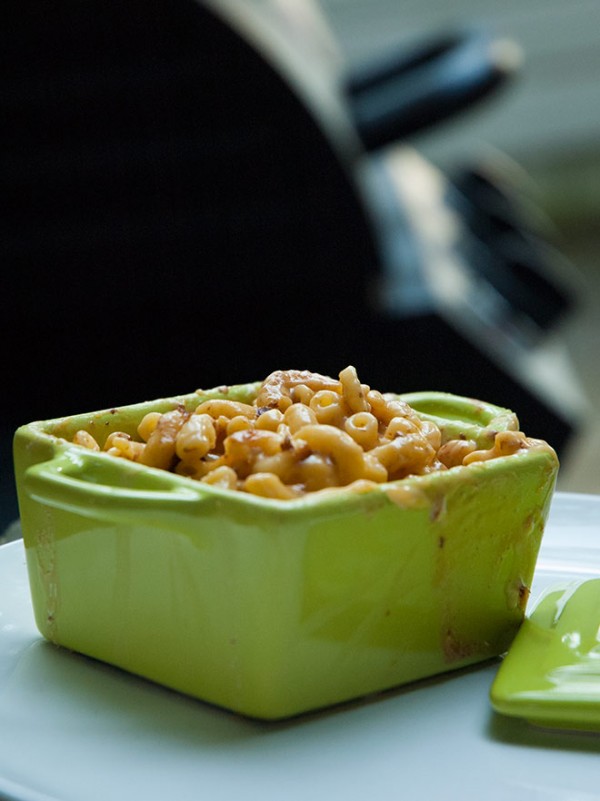 In these kitchenless* times, John and I find ourselves out-of-doors on the daily, sipping cold beer in the shade and watching Buckhead’s late afternoon traffic. (Almost every passing car costs more than I earned last year. It’s fun.) Our meals are so frequently prepared on the grill that I’m no longer content with the traditional marinated-meat-n-veggie combo. So, to supplement our new vagabond lifestyle, I’ve been adapting some of my favorite foods and upgrading recipes to add grill compatibility.

Macaroni and cheese hasn’t been the easiest, but once I figured out how to make it in a single pan without the mess of boiling and draining water, there was no looking back. Plus it’s got a little extra something from the grill, with all the browned bits of cheese mixed in, which never seems to happen in the oven. I envision myself continuing to make it this way even after the house is finished, because it fits so nicely into a laid-back afternoon on the patio with friends. I will, however, employ my future kitchen in the future cleaning of the single pan, ensuring a less cheese-splattered future for our bathroom sink. 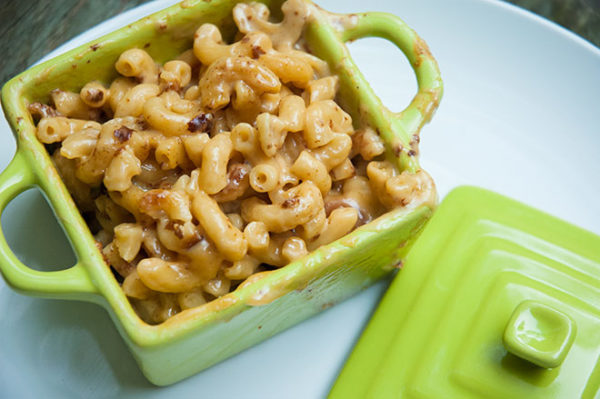 Notes: There are two kinds of macaroni and cheese in this world, as far as I’m concerned: creamy mac ‘n cheese made with American cheese, and cheesy mac ‘n cheese made with any number of real cheeses. Fans of the latter often revile the former because it lacks the stretchiness and subtle flavor they enjoy, and because it features unglamorous processed cheese; enthusiasts of the former generally don’t relish the comparatively gritty, oily texture of mac ‘n cheese made with real cheese, preferring the salty richness of a processed-cheese bechamel. With respect to both camps, this particular recipe is of the creamy variety. There is certainly room to add real cheese to the recipe if you wish, though if you replace the American cheese entirely, I can’t say what texture might result.

Heat the grill. Ideally, you will keep it between 350 and 400 degrees Farenheit. Also, take the cream and milk out of the fridge and set them nearby so that they won’t be ice cold when they go into the sauce. 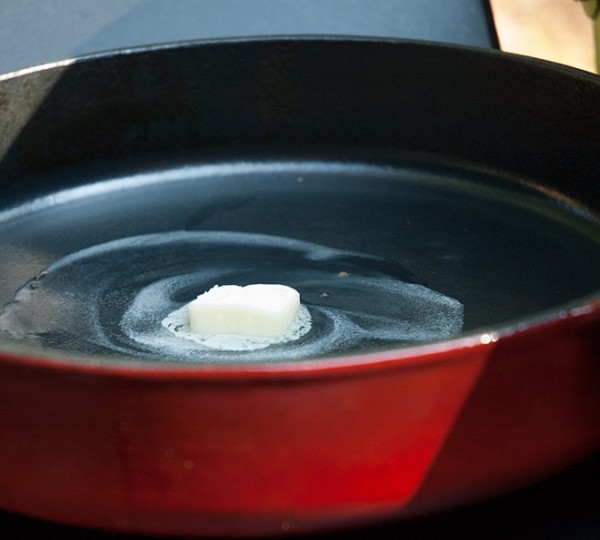 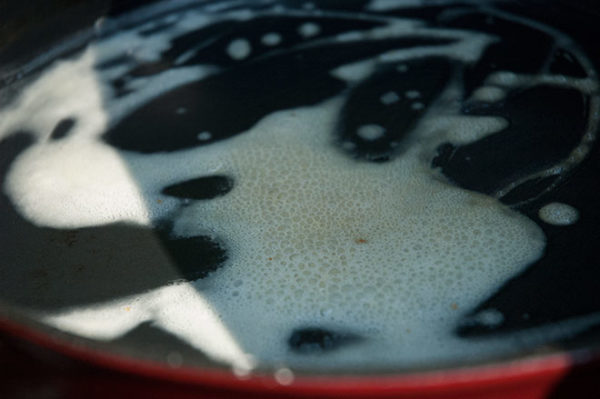 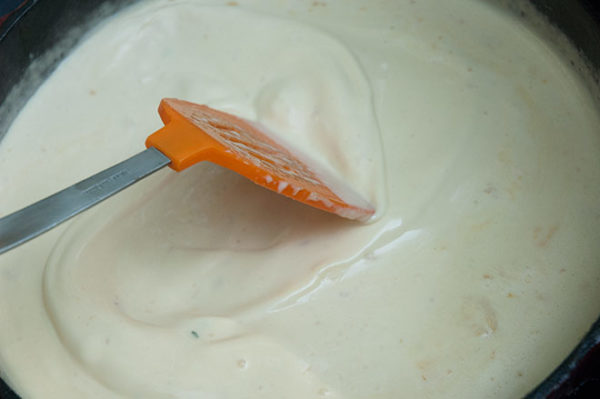 Make the sauce. If your grill has a side burner, that’s the easiest place to make the sauce, but if not, it’s okay—just be careful reaching over your grill! In a cast iron skillet** or other heavy, oven-safe pan, melt the butter and stir in the flour. Allow the mixture to foam, stirring occasionally, until it turns the lightest golden brown. Pour in the cream and allow it to scald. Add cheese (either sliced or cut into chunks) and stir until melted. Season as desired, stir in one pint of the milk, and bring to a boil, stirring constantly; lower to a lively simmer for a few minutes, then turn off heat. 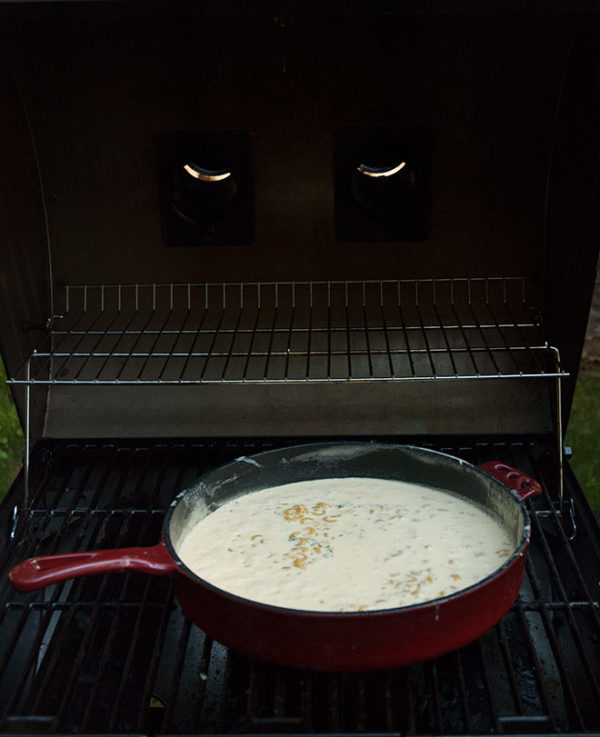 Stir in dry macaroni. It should be covered by the liquid in the pan; if not, add more milk. 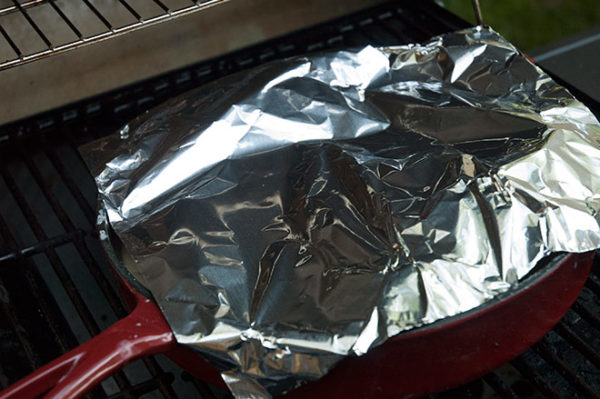 Cover the skillet with foil and place it on the grill. 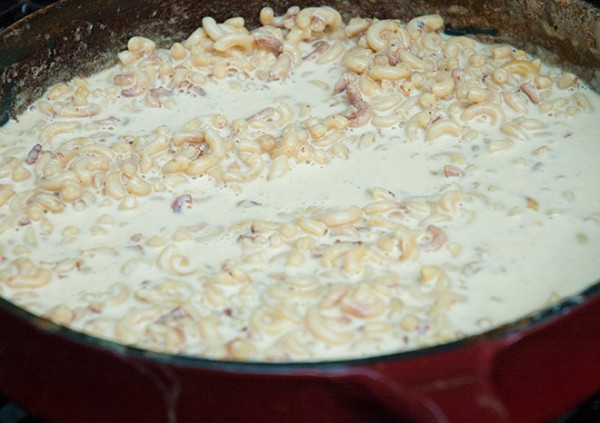 After 20 minutes, stir the macaroni. The bottom will probably have started to brown and stick; scrape the pan and stir the browned bits into the macaroni. There should still be enough liquid to cover almost all the macaroni; if not, add more. Cover and cook another 10 minutes or until macaroni is almost done. (What is “almost done”? Like, you can eat it, but it still has a faint crunch so it isn’t tender enough to serve. That’s almost done.) 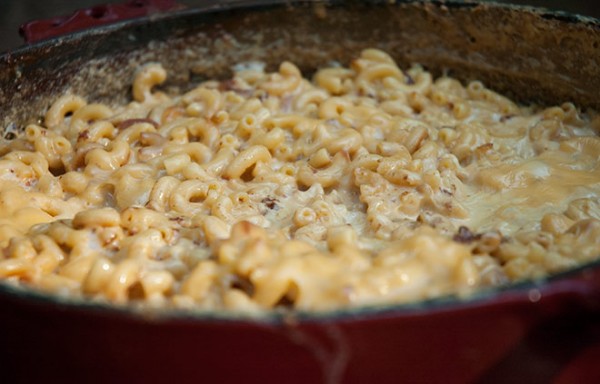 Uncover the macaroni and top as desired. I like to do this in one or two ways: I either place an extra layer of American cheese atop the macaroni, or if I’m feeling fancy, I shred some real cheese on top (Gruyere is great for this) and sprinkle panko for a crispy, stringy crust. (This is also a good time to stir in any yummy extras you might have access to, like broccoli or crumbled bacon.) Leave the pan uncovered, close the grill and cook another 10 minutes or until the desired macaroni softness is reached. Carefully remove from the grill and serve. 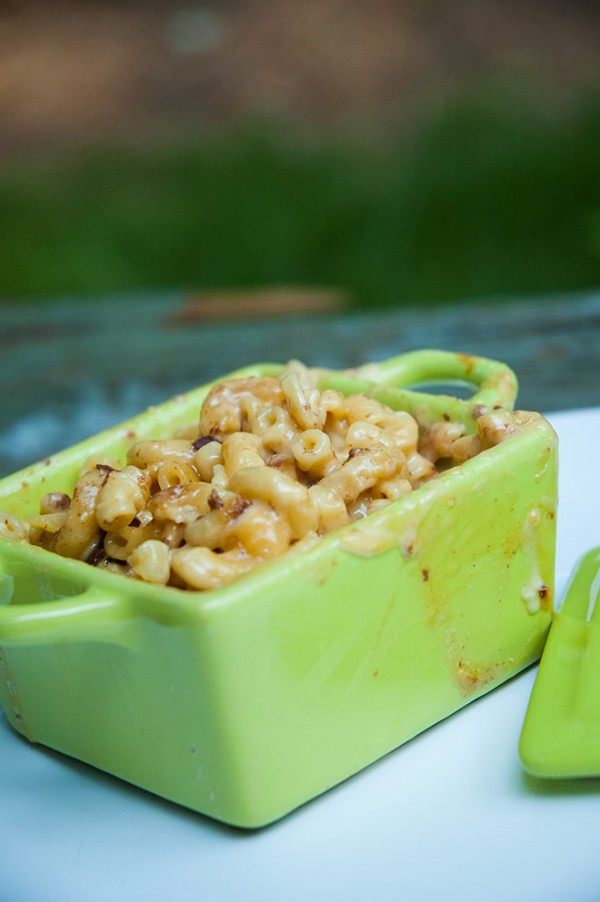 *New and occasional readers: We moved about two months ago, but the house is undergoing renovations and doesn’t have a kitchen yet. Readers who already knew this and were expecting the asterisk to lead to something new, the best I can do is about 250 words I wrote for Scene Missing last week, inspired by the trailer for a movie called The Bling Ring. This is in absolutely no way related to the topic at hand.

**My cast iron skillet is nonstick-coated, so I use it for a lot of things that you may or may not be comfortable exposing your cast iron to. It ends up covered in stuck-on cheese at the end, which soaks off easily with hot water, but if you’d rather not deal with it, try a traditional or disposable roasting pan. Because of the thinner base, you’ll just need to check on it a little more frequently and stir to make sure nothing burns.