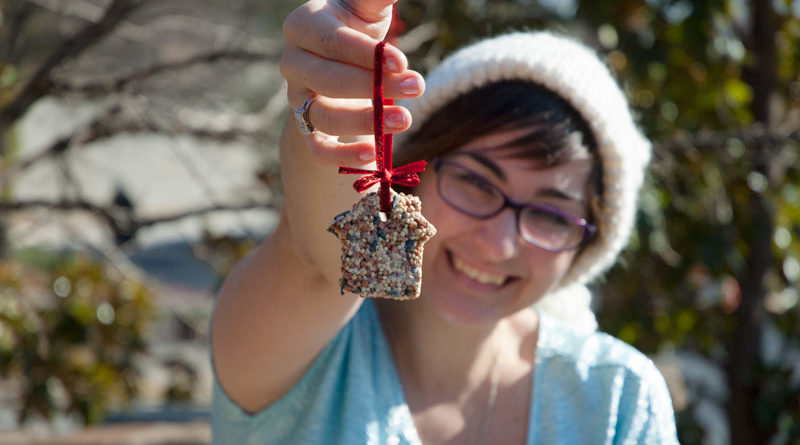 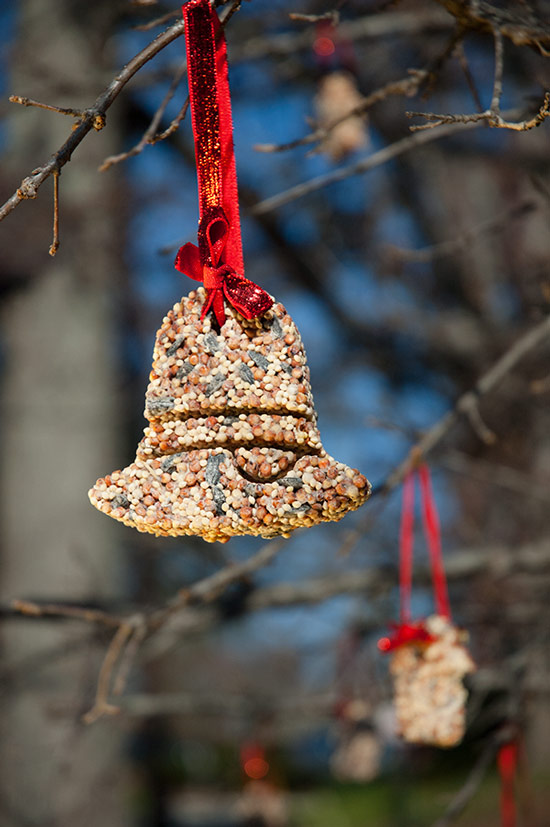 The birds in our neighborhood have a lot to put up with. It was bad enough when the leaf-blower guy showed up every Monday with his noisy, smelly, gas-guzzling abomination, but here he is on a Friday morning and I can barely hear myself think. It’s like sitting in the middle of one of those NASCAR tracks during a race, which is where I’ve been told people prefer to sit, but I know I must have misunderstood because that’s beyond crazy.

Bird thoughts, presumably, are quieter than my own, in what I imagine is a proportion roughly comparable to the respective sizes of our brains. You know, like speakers. So on Mondays and now Fridays, the poor little guys must think they’ve fallen dead out of the sky and been reincarnated as a tiny NASCAR pit crew.

They deserve a little holiday magic if anyone does. 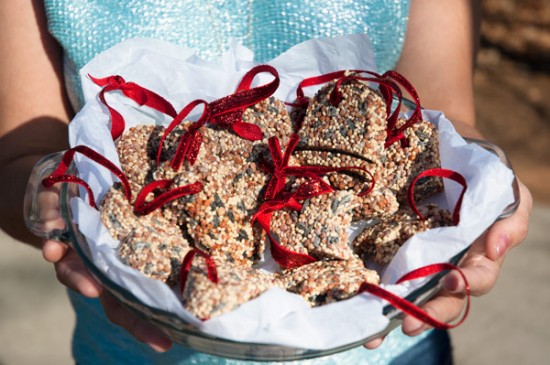 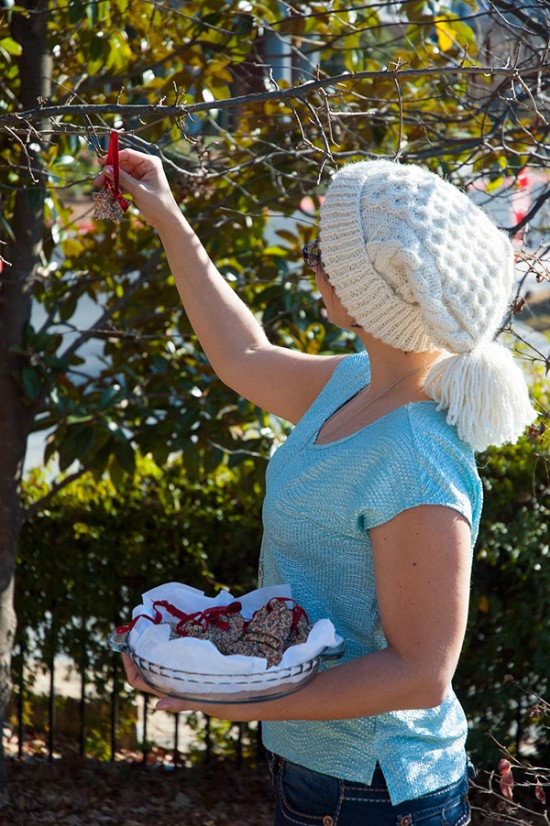 It didn’t start out as an altruistic measure. I didn’t hear the vvVVVvvvVVVVvvvvVVmmm of the leaf-blower guy and think, “I should do something nice for those sweet birds.” I’d like to think I could operate that way, but as usual, this plan was a result of my overthinking and overneurosisizing what should’ve been a simple task.

But sending out holiday cards isn’t a simple a task when you’re a freelance designer. All of a sudden, my holiday card—a card I usually don’t send at all, which I tell people is because I think greeting cards are a waste of our planet’s resources but really it’s just one more thing than I care to deal with in December—has become my best annual opportunity to showcase my skills at conceptualizing, illustrating, designing and writing a little greeting that will go out to some of my clients. Those clients will either receive the card, love it, and call me for their next project, or hate it, throw it away, and burn all my business cards. This, of course, is paralyzing.

It’s easy to come up with stuff like this for clients, but ask anyone who has ever tried to write an “objective” for their resume or a slogan for their own home business: it’s a lot harder when you’re trying to encapsulate yourself.

Do you think those birds have ever had to design a holiday card for clients? Stupid birds don’t know the first thing about hardship. I don’t care how cold it is.

Thinking it would help get me moving, I tried making a list of what I wanted out of the card:

That’s when I realized I was going to have to outsource this project to an agency. I needed somebody with ten times my talent.

And as usual, as soon as I decided the whole thing was impossible—the very instant I gave up on it altogether—it became pretty easy. 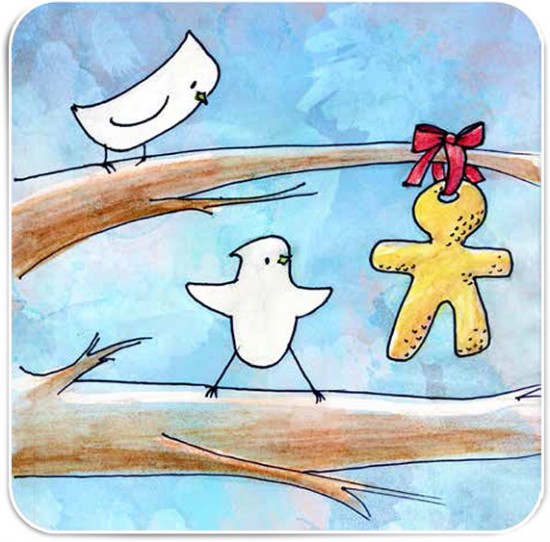 I wouldn’t say I nailed every item on my ridiculous list, but by then the list was fluttering across our front yard in a thousand tiny compostable pieces. I was back to the singular objective of creating a card that represented my style and design personality. I did three doodles in my sketchbook, chose one to color in, and made matching birdseed ornaments to give to a few friends and nearby clients. This kind of simplicity and spontaneous execution is my design personality, and I tend to forget that when I get caught up in the objectives. At no point did I allow myself to stop and analyze or agonize over this silly drawing of birds, and I’m happy with the result.

Sometimes, in order to do my best work, I just have to know it’d be okay if I didn’t.

The hitch is—and stop me if this doesn’t apply to you—once I begin to inflate the importance of certain goals (as I’m wont to do) it becomes harder to imagine accepting anything less. And when I don’t give myself permission to do less-than-the-best, it becomes very, very difficult to even get started.

What I’ve been surprised to discover is that sometimes it helps to build the goal up to more and more absurd proportions, until it reaches the absolute nadir of attainability, forcing me to surrender my ambition for getting it done perfectly and settle for getting it done at all.

I suppose, in a way, my philosophy is that nothing is worth doing unless it is impossible.

I suppose I should consider changing my philosophy. 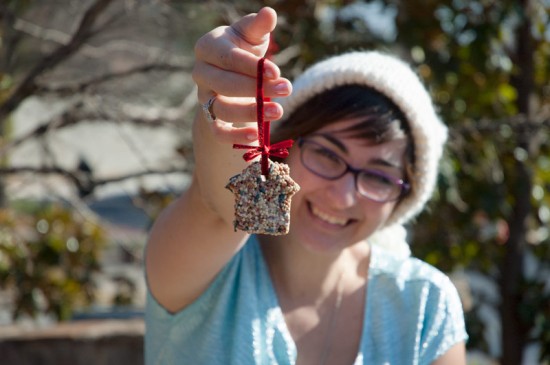 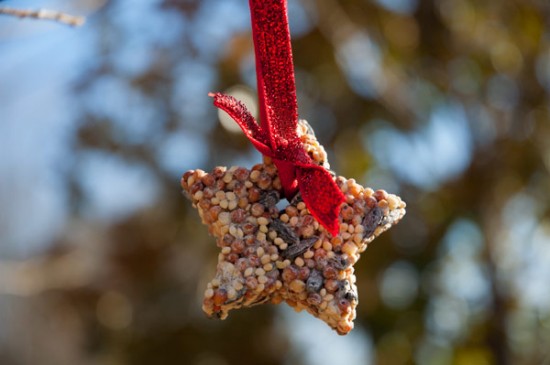 I used this lovely birdseed ornament recipe from Saltwater Kids. There are similar recipes that use peanut butter instead of gelatin, but I thought there was a chance that they might spoil, and I didn’t want to gift anybody something that might spoil. This one uses a mixture of ingredients with a pretty long shelf life: 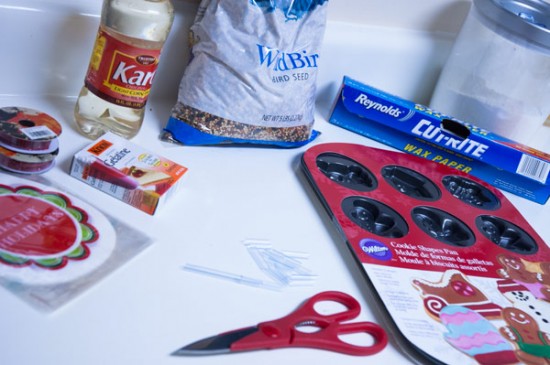 The recipe made more than would fit into my mold, so I wound up using cookie cutters, too. It was lucky, because the mold didn’t work out as well as I’d hoped. The shapes were too detailed and the birdseed was too course, so some of them weren’t even discernible. I had to go back and look at the mold to figure out what they were supposed to be. 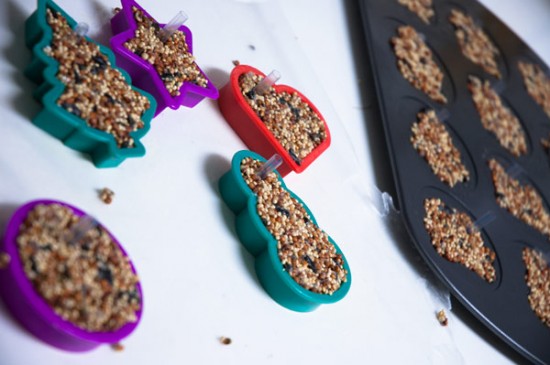 Once they were hard enough to unmold, I did, but they were still very delicate. I left them out for a few hours until they were harder, and I tried tying a ribbon to one of them. It was too soon and I broke it. Unlike people-cookies, there is no pleasure in accidentally messing one up in the process, because that doesn’t mean you get to eat it. 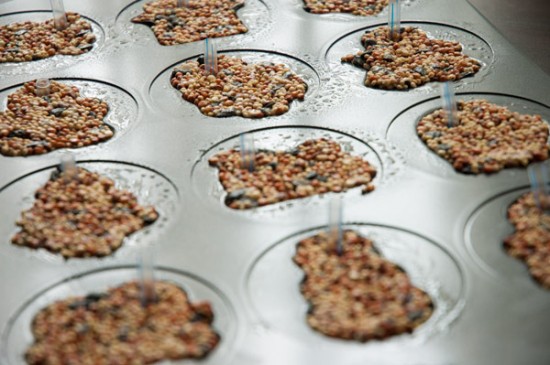 It was not until the next day that I started to see the faint powdery coating that told me they were fully set. But the other side was still sticky. I flipped them over and waited another day, and then they were very hard and durable. So make these in a place where you can afford to leave them out for a good, long time. Don’t be like me and keep them on the kitchen counter because surely it’ll just be another hour or two. It won’t. 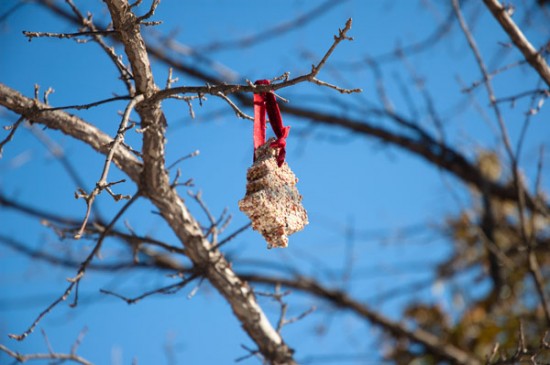 When they’re done, I recommend sprinkling all the trees in your neighborhood with sparkly little outdoor birdseed ornaments, because it feels pretty good to give the birds a present. And it looks so pretty. And you could probably stand to spend more time outside. 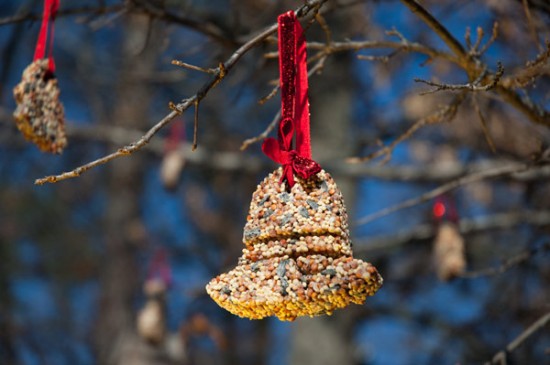 My hope is that when the cookies are all gone, the little birds will take the ribbons away and use them for their nests.

Because otherwise I guess I’m littering.